Brenda opened the meeting by welcoming 17 members together with new member Hilary; there were also apologies received from 3 other members unable to be at the meeting. 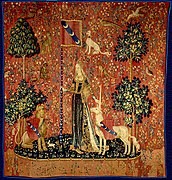 The evening’s discussion commenced with members saying that generally they had found this book an easy and quick read, absorbing and very informative with regards to the art of weaving the tapestries.  At times it was felt to be a bit mundane by a few members.  Quite a few members said they had started the book with a little trepidation expecting to hate or not like it at all, mainly due to its content, setting and period but had been pleasantly surprised by it and found it to be an enjoyable read with an interesting topic.

Members did find it interesting from the historical aspect with regards to the different levels of women’s representation, and social conditions of the time; women being totally suppressed in the workplace and in the case of the tapestries not being allowed by the Guild to weave, although totally competent to do so. It became very obvious that rich and poor social conditions markedly mattered especially as far as women were concerned with them having absolutely no choice in their plight.

Although it was felt women’s personalities were quashed, in the main, the book was sensitive in its portrayal of some of the main characters.  One who stood out and was liked by everyone was the master weaver George’s daughter, Alienor, who was so sensitive and shone through her blindness “finishing off” by feel, the cutting ends of the tapestries, working through the nights when the other weavers were not able to through lack of light, so saving the much need valuable time and space. She with her mother Christine, even wove some of the background flowers!  She spent long hours nurturing her garden which was full of every flower for every season knowing by touch and smell their names.  Everyone was relieved that she was able to escape an unpleasant (and would have been rather smelly!) marriage to the wool dyer Jacques de Boeuf.  Philippe was thought a bit of a hero stepping in to claim the baby was his so releasing her from the fate.

It was felt that the book was quite “saucy” and naughty in parts with members agreeing the artist Nicholas was definitely a bit of a creep!!!  One member even saying “He was good at what he did!!!” (we think she meant as an artist of course????!!). Talented in his work, capturing, especially as these were not battle scenes his usual form of design, the feel of the tapestries and the story that unfolded.  Several members warmed to him a little (only a little!) as it was felt he was observant to other situations (as in the case of Alienor) and with his art he was still willing to learn the ways of weaving and how it worked with his paintings.  His “naughtiness” with the female population in the end proved some “come-uppence” with the birth of Claude (daughter of Marie-Celeste taken in by Claude (daughter of Jean le Viste) yes confusing – are you keeping up!!) Phew!!! Where is the popcorn???

Other characters were then discussed briefly. A lengthy and interesting discussion followed re women accepting their plights through the ages and how far it has come in this day and age.  As too were the making and history of the tapestries which drew the general agreement that the book had been really written as two halves. Some feeling it was well-researched, cramming in everything so that it really didn’t enhance the book.  But everyone quite enjoyed it. There were no real surprises.  All ends tied up well with several characters having happier endings than others!!

We would recommend this book to others and all agreed we would look at tapestries in a totally different light.

There are no upcoming events at this time.

Also find us on: